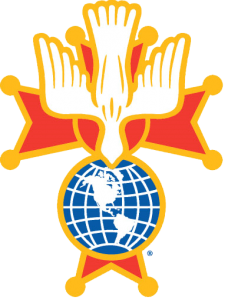 Knights of the Patriotic Degree are dedicated to the personal development and continued honor of brother Knights. We are always there to offer leadership, guidance, and encouragement.

Knights of the Patriotic Degree glorify God by serving our communities and nations as though Christ were the one being served.

Knights of the Patriotic Degree hold unwaveringly to what is right and honorable, working to keep God in the civic arena, serving the life of the Church, and defending laws that recognize the sanctity of life and true religious liberty.

The Color Corps is an elective division of the Patriotic Degree that presents a visible reminder of our service to the community.

The idea of adding new degrees to the Order’s original three, (Charity, Unity, Fraternity) first came to light in 1886. Supreme Knight James T. Mullen appointed a committee to look into forming two new “commander” degrees. That same year the Connecticut Catholic, a local newspaper, carried an advertisement calling members of local Knights of Columbus councils to meet to form a “Uniformed Legion.” The idea for this new unit arose from a growing nation wide sense of Nationalism, or what we would call today Patriotism. The unknown author in Connecticut was not alone in wanting a visible organization.

Little happened at this time because there was not enough wide spread interest in creating additional new degrees. The Order’s leaders balked at the idea of a Uniformed Legion for the simple reason that the cost for the “Uniform” was well over $100.00. They feared the “Legion” would cause an economical class split between wealthy and poorer members of the Order.

Following the Spanish American War, it was decided that there should be one new Degree added based on the principle of Patriotism. In 1899, Edward L. Hearn was elected Supreme Knight and he immediately appointed a committee to establish and format the new Degree to be given the following year.

In order to qualify for this Degree each candidate had to be a Third Degree member of the Knights of Columbus in good standing for three years, and show evidence of distinctive service to the Order, church, and community. Finally the candidate had to have a letter from his priest stipulating that he had received communion within the past two weeks.

In the early years of the Fourth Degree, members met as part of their councils, mostly after meetings. In 1910, during a reorganization of the Order’s leadership, the first Assemblies were created. Additionally the position of Supreme Master was established to lead the Fourth Degree internationally. Vice Supreme Masters lead Provinces and Masters head Districts. This system has spread and flourished as Sir Knights not only serve their local Church through their service to local councils but also their joint efforts in these Assemblies.

The Honor Guard, first called for in 1886 was officially formed in 1902, for ceremonial purposes. Since that time, the uniforms of the Color Corps have varied, however all have shared the similar theme of mariners. Most noticeable in today’s current uniform is the chapeau worn with ostrich feathers.

In the year 2000, the Fourth degree celebrated its 100th anniversary with approximately 252,000 member Sir Knights!!!